Compone is a community of 2,000 in the Andean Mountains of southern Peru, 16 miles west of the city of Cuzco. It is a traditional Peruvian highlands farming community which relies on grain crops, livestock, and dairy products as the main sources of livelihood.

In the spring of 2008, a development engineer working with the Association of Conservation of the Amazon Basin (ACCA) approached EWB-UMD to propose a water sanitation project in Compone. The community had two water-related issues: water shortages in the dry season and an untreated water supply.

Inefficiencies in the irrigation network causing great water losses was the main cause of water shortages. Consequently, this was chosen as EWB-UMD’s first project. Secondly, the untreated water was spreading gastro-intestinal illnesses from waterborne viruses, bacteria, and cysts. It is believed that the contamination stemmed from animal waste upstream of the spring, which is commonplace in agricultural communities.

In January 2015, after completion of the water project, an assessment team traveled to Compone to finalize a decision on the next phase of the program. Compone’s leadership and EWB-UMD ultimately agreed to focus the next project on increasing road safety, a concern stemmed from the frequent accidents, some resulting in casualties, which occur along the highway. Consequently, a specific pinch-point for pedestrian traffic where the highway passes an annually-flooding stream was chosen as the site for the implementation of a pedestrian bridge.

In two implementation trips in August 2017 and August 2018, EWB-UMD completed a 17-foot-span reinforced concrete pedestrian bridge. This pedestrian bridge now allows for Compone residents to safely circumvent the highway when crossing the flooded stream. In the Summer of 2019, the chapter will travel again to monitor the ultimate effect of the irrigation, chlorination and traffic safety projects on the community. 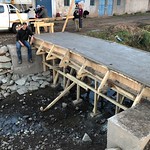 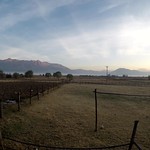 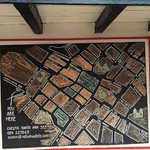 Peru formwork is done! The team will begin rebar and the railing details on Monday.

Our Peru team is finishing up CAD work for their bridge!